–This is an unrolled, minimally-edited version of my occasional Twitter Threads. You can find others by searching the #TalkingTolkien hashtag over there, or by following me @thetowerofstars.–

I’d like to talk about The Lord of the Rings – specifically something that rubbed me wrong about the transition between book & film. A topic I’ve not seen do the rounds.

A caveat: I love the movies. (Extended) #FellowshipoftheRing makes a lot of cuts from the book (I miss my barrow-wights) but remains near-perfect. Though the quality peters off as we get through the trilogy, they’re all great and the bar for remakes is damn high.

Anyway, on with the pontification. This might seem strange, but back when I first read #TheLordoftheRings (and for many years after) I didn’t really see the core Fellowship as being ‘heroes’ – not in the ‘hardy killing machine’ sense. You see, Tolkien reinforces the idea that dwarves, elves & (Numenorean) men of the west are stronger, tougher, wiser and straight-up better than Breelanders & the like. Aragorn is the best because of his bloodline, etc, but he’s still just a ‘better’ Dunedain. If Middle-earth could count on these three races as its defenders, all would be well, but they’re in decline by the time of the #WaroftheRing. Who wouldn’t want an alliance of orc-slaughtering badasses who could run ~135 miles over rough terrain in under four days?

So Aragorn, Legolas and Gimli weren’t heroes to me, but representatives of their races. Let’s not forget that Legolas & Gimli were pretty much chosen for the Fellowship by chance. It made the stakes suffocating. ‘With these races in decline, who can stand against Sauron?’

(Tangent: In my mind, Boromir’s jealousy of Aragorn arose not only from differing stature. Status aside he – even as Gondor’s mightiest – was never going to measure up. Let’s not forget that the Boromir in the books is not the charming, heroic Sean Bean of the films.)

Roll around to the films, & at first everything lines up. The Battle of the Last Alliance bang on reinforces everything I’d come to expect. Orcs get chopped down like wheat, but the power of men (of the West) & elves is nothing before Sauron’s great stompy might. In fact, Fellowship (other than mostly erasing Numenor – Aragorn’s birthright is dallied with only when it’s important to the plot) reinforced what I expected. Sure Boromir is far more likeable & a more tragic figure, but this was a smart choice. He’s great.

Then comes The Two Towers, and the slaughter of the Haldir’s elves. (Helpfully garbed in red cloaks, so we know they’re all going to die). None of this, ‘elves are better than men’ stuff. Blink and you’ll miss ‘em. See the look on Haldir’s face when he knows he’s going to die? That’s the look of someone who’s wondering how one can roll so many critical failures in a row. 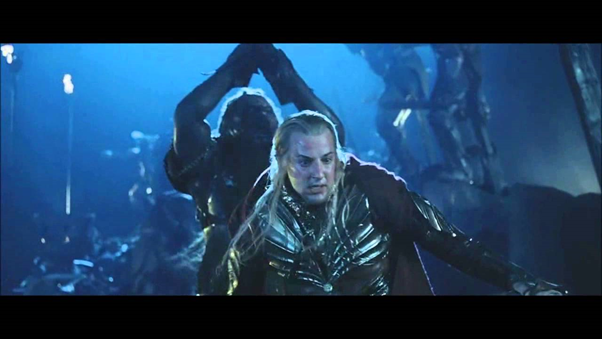 And while Haldir & his fellow Galadhrim (sent by Elrond, for some reason… No. I’m not getting into all that. There are so many odd choices around Helm’s Deep that I’ll be here all day.) Legolas is surfing on shields and generally having fine larks. The running tally of kills he and Gimli have suddenly matters less, because they’re clearly having a different battle to everyone else. (#ReturnoftheKing leans further into this).

Helm’s Deep gives us our first (and only true) point of comparison between a ‘named’ warrior and a bunch of ‘normals’. It’s where we first truly see that our movie Fellowship are superheroes. And then we look back at Aragorn’s depiction so far, and realise the movies don’t want you to think of him as a different race of men, but a super-man. It … jarred for me, the first time I saw it.

Why? Well, #TheLordoftheRings, for me, was a struggle of heroes born when they go beyond what is asked. It starts with the Hobbits, but also picks up Legolas, Gimli, Faramir, Treebeard, & Eowyn. Maybe even Aragorn – we know he’s going to be king, of course, but he doesn’t.

These are people who reshape the world because they throw off the shackles of tradition & fear. They stand up when everyone else stands back. Or to quote Gandalf (who kinda, sorta has his own moment of choice when the Balrog pops up): “All we have to decide is what to do with the time given to us.” Merry & Eowyn’s decision to ride with the Rohirrim; Sam’s pursuit of Frodo after Amon Hen; Gimli & Legolas getting involved with a doomed bunch of strangers; Treebeard rousing the ents to their final battle; Faramir letting the One Ring go – these are weighty, heroic choices.

When Aragorn, Legolas and Gimli are revealed to be the Middle-earth Justice League, we lose some of that. Their choices carry less weight, because they’re not representative of their own peoples. They’re just better. And diminished as a result.

I still love the #LOTR movies. And, in truth, this one (fairly minor) change highlights what I consider to be the story’s core message: that it’s not someone’s ability that makes them a hero, but their will to act. It’s an idea I revisited while writing #LegacyofAsh: the decisions that matter are those made when the characters are powerless. Viktor & Josiri, Calenne & Melanna – even the supporting cast. It’s not strength that makes a hero, nor magic or battle-skill. It’s when everyone else stands back, and you stand up. In real life or in fiction, it remains true.

That crazy #Tolkien. Dead the better part of 50 years, and he’s still teaching me things. It’s not the only definition of greatness, but it’s not a bad start.

Legacy of Ash is available now, in ebook, audio and weighty paperback. Visit the links below to find out more!

Fates turn. Legacies burn. A Phoenix shall blaze from the darkness.

Like Loading...
Posted in Featured Blogs, Recent Ramblings, Thoughts from the Tower and tagged Inspiration, TalkingTolkien, The Lord of the Rings, Writing.